To share your memory on the wall of Gene Nancoo, sign in using one of the following options:

It is with profound sadness we
announce the passing of Mr. Gene
Nancoo at the age of 87. Four
months after losing his dearly
beloved wife Joyce, he has gone to
meet her to celebrate their 62nd
wedding anniversary and her
birthday on December 14th. He was
the cherished father of Karen
(Dexter Lakhan), Kurtis, Kramer, Karl
Vedh and Kaedmon. Adoring
grandfather of Karli, Derek and Piari
Roopchan, Cassidy Lakhan, Kyle and
Erin Nancoo and Aidan and Evan
Nancoo. Doting great-grandfather
of Elise Roopchan. Precious son of
the late Charlie and Sookiah
Nancoo. Beloved brother of
Soonaria "Deed" and Deonarine
Charran (both dec), the late Lochan
(Radica) and Chaitram and Agnes
(both dec). Loving uncle and cousin
to the extended Nancoo, Sinanan
and Sankersingh families in Canada
and Trinidad.

A brilliant student and
exceptional athlete, he excelled in
cricket as a left handed spin bowler.
Gene went on to teach hearing
impaired students with the TDSB
until his retirement in 1995. An
outgoing soul who made friends
wherever he went, he loved
traveling, sports and the casino. An
avid gardener and excellent cook,
he was known for his Moruga
Scorpion homemade pepper sauce,
soups and curries. Mr. Nancoo,
Gene, Choy, Dad, Brother, Uncle,
Nana, Ajah - though he went by
many names, he was always the
same - warm, welcoming and ready
to throw a party!


If desired, in lieu of flowers, a donation can be made in Gene's name to the Canadian Hearing Society.
Read Less

To send flowers to the family or plant a tree in memory of Gene "Choy" Nancoo, please visit our Heartfelt Sympathies Store.

Receive notifications about information and event scheduling for Gene

We encourage you to share your most beloved memories of Gene here, so that the family and other loved ones can always see it. You can upload cherished photographs, or share your favorite stories, and can even comment on those shared by others.

Posted Nov 26, 2019 at 10:44am
Karen and Dexter, From your family at ALPS, We are so sorry of your recent losses of your parents. With our love and sympathies. Your friends at ALP

Blooming Garden Basket was purchased for the family of Gene Nancoo. Send Flowers 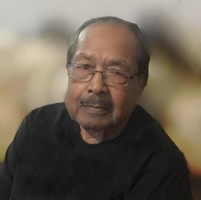